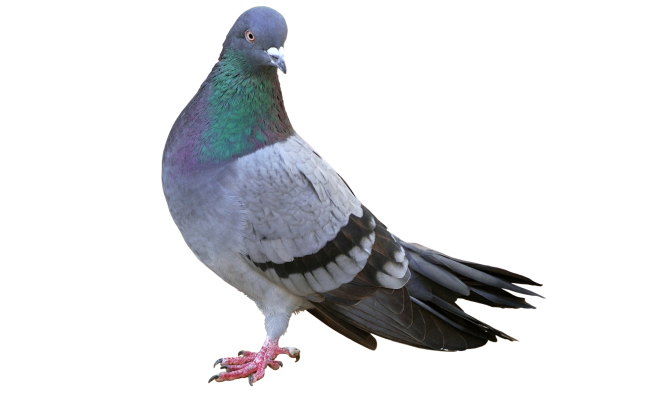 The feral pigeon is found throughout Britain and in most regions of the world. Many people associate this bird with urban environments and are sometimes called the ‘town pigeon’, however it is often found in rural surrounding such as farms.

These birds are descended from rock doves which explain why they often nest on building ledges, under eaves or on girders. Nests are constructed of grass and twigs but can also contain other pieces of plastic and rubbish.

The peak breeding season is between March and July but feral pigeons are capable of breeding all year round. The brood is usually laid on consecutive days and consists of two off-white eggs, the incubation period lasts for about 18 days and the hatched chicks are fledged after about 30 days. Another clutch can be laid when the young are only 20 days old which means that up to nine broods can be produced per pair per year.

Feral pigeons tend to scavenge food and are often found around food premises, docks and mills and flocks of several hundred birds can be common where spillage is abundant.

How do we control pigeons?

Various methods of control for this species are allowed by law, these include all humane methods such as netting and anti-perch spikes.